The History of the West Wing: Visiting 8th Century China

The History of the West Wing is a graphic novel based on a traditional Chinese story of the same title. It closely retells a play by thirteenth century dramatist Wang Shifu, which was in its turn based on a ninth century story by Yuan Zhen.

It’s the story of a romance between a young wanderer and the daughter of a government official. Their love is initially forbidden because the young woman, Pianpian, is engaged to another man. But it’s easy to tell from the very beginning that the two will end up together after all. So yes, the plot is simple and more than a little predictable, but there’s a reason why The History of the West Wing is still a charming and very satisfying book: Guo Guo’s stunning art.

The setting and cultural details were what interested me the most about this book, and the artwork conveys them perfectly: the interior of buildings, the scenery, the character’s wardrobes, and even their mannerisms, the way they move, and what this implies in terms of social structure and power dynamics – this regardless of the fact that we never actually see them move. But Guo Guo’s art brings eighth century China to life so beautifully that we almost believe we do. 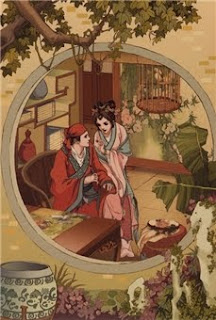 Because the story is not only set in the eighth century, but also originally from around that period, I was expecting to do some major eye-rolling when it came to gender roles. However, things weren’t quite as bad as I feared: Pianpian doesn’t do much, but she’s not helpless either. Furthermore, and much to my satisfaction, the romance was actually believable.

There was a beautiful scene early in the story that made it more than the tale of a man who sees a beautiful woman and decides that he has to have her: we see Pianpian and Yuqing, the hero, sitting and talking together while taking shelter from a rainstorm The scene is completely wordless, but it conveys so much: the art shows them talking and laughing; we get the sense that quite a few hours have passed in this manner, and we see changes in the way they look at each other. Guo Guo’s beautiful drawings convey this better than I could possibly explain. 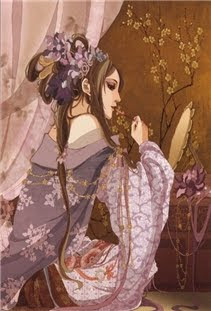 This one little scene makes the story rise above yet another tale of star-crossed lovers who have never exchanged two words – a kind of tale of which I’ve never been a fan. 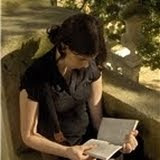 Ana is a twenty-something reader, recent graduate and future librarian from Portugal. Read more of Ana's reviews at things mean a lot.

"... I was expecting to do some major eye-rolling when it came to gender roles."

Hee! It's always nice to find someone who reads like I do: ready with the eyerolls, but overall, hopeful.

Gorgeous artwork in that book.

The pictures from the book look absolutely beautiful. I would definitely read this.

Tanita: There were some eyeroll worthy moments, but overall I expected worse :P

Vivienne and Amanda, the art is some of the best I've ever seen in a comic! I'm definitely keeping an eye on Guo Guo's work.

Susan, thank you again for having me! It's always a pleasure.

The illustrations in this book look gorgeous! I haven't read many graphic novels, but this seems like one I would take a chance on. Your review really intrigues me, so I will definitely be looking for this one. Thanks!

The illustrations are amazing. That alone would draw me to the book. I like the historic aspects, but you got my curiosity up when you wrote: "the romance was actually believable." So often relationships are not well developed.

I didn't read the review. I just looked at the pictures. This is major for me because I usually read the words and skip the images! I had decided not to buy another book until I read five that I already have. I'm about to break that little self imposed rule!

Definitely eye-candy, this book would be worth buying if only for the art.

Yeah, the artwork alone is enough to sell me...

Wow, now I want to have this book!

Remind me never to give you a book like this again, Nymeth. Now I'm going to be indirectly responsible for book-buying. (I was doing so well with the bad blogger avoidance thing!)

I'm glad to hear you're still enjoying the artwork so, though! ^-^ I'd have loved - loved! - to have seen a longer adaptation (although I suppose if the Chinese play I read today is any indication this might've been all the length there is) with more wonderful, drool-worthy artwork, but... Alas.

Sounds majorly awesome, Ana! I think I'm going to have to read this. Do you know if it's available online?

I'm happy to hear everyone is as in love with the art as I am!

Heidenkind, The Book Depository has it, and they have free shipping!

Shanra: So you did manage to find the original play? I take it it wasn't exactly very complex either? That's often the case with traditional stories, I find. I love them, but they're often pure plot, with not that much in the way of depth or characterization. But ah, the art...we need a Guo Guo art book. Thank you again for sending me this!

And Beth, I hope I didn't raise your expectations too much when it comes to the romance. The book is short and everything happens quickly, so there isn't room for much development. But I was happy that it wasn't just a story in which the protagonists are supposedly madly in love without ever having even talked. Those always make me roll my eyes :P

*shakes head* I'm afraid I didn't. It's just that the short collection of Guo Moruo's poetry that I have starts with a (very) short play by my/Western standards, so I wouldn't be surprised to find out that this one was very short too.

The art looks absolutely fabulous! Thanks, Ana, this is going straight onto my wish list!