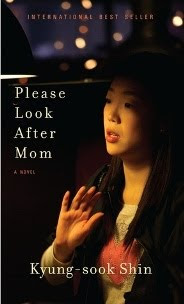 It’s been one week since Mom went missing. . .

Park So-nyo is an elderly woman who's’ trailing behind her husband in a crowded Seoul subway station when the two become separated as it’s time to board. It should have been a routine trip to the city from the country but turns into a mysterious disappearance as hours turn into days without Park’s return. What follows is a sometimes lazy, other times desperate search for Mom by her husband and five grown children as they reflect on their lives with her.

Usually when an author uses a second-person narrative, I can’t read past the first page. I often find this point of view gimmicky and too distracting to become engaged in the book. I think it speaks volumes of not only Shin’s talent as a writer but Chi-Young Kim’s talent as a translator that PLAM doesn’t read this way.

There’s so much that I can say to describe PLAM. I can tell you that it’s about family and motherly love. I can also say that it’s about guilt and the role of mothers in any culture. As a mother, I can tell you that being a mom is one of the most rewarding roles that I have ever had but it’s also the most demanding and hardest. There’s no off-days, no breaks, and you’re “on call” for the rest of your life. Shin expertly illustrates how much women sacrifice for their children without children always being aware of it. Park is the mother who sells her wedding ring so that her child can have what they need and who’s constantly working in the fields to make sure her children have enough food to eat. I’ve read reviews about this book that described Park as a martyr and I think that shows how cynical people have become of mothers. A martyr is someone who accepts their suffering which is the opposite of this character. Park doesn’t accept her suffering but gets through it without harming others.

Shin does a beautiful job exploring the life of Park through the eyes of her family and herself. Readers learn about a woman who was slowly becoming sicker the older she became, who had headaches that were so bad she couldn’t cry when she learned that her only sister died. But readers also learn the roles about the family has played in Park’s disappearance: the husband who was so selfish that he refused to acknowledge the growing pain his wife was in; the daughter who’s also a famous writer and her inability to have a conversation with her mom about the places she travelled; or the son who was his mother’s favorite but never did enough for her.

You don’t understand why it took you so long to realize something so obvious. To you, Mom was always Mom. It never occurred to you that she once taken a first step, or had once been three or twelve or twenty years old. Mom was Mom. She was born as Mom. Until you saw her running to your uncle like that, it hadn’t dawned on you that she was a human being who harbored the exact same feeling you had for your own brothers, and this realization led to the awareness that she, too, had had a childhood. From then on, you sometimes thought of Mom as a child, as a girl, as a young woman, as a newlywed, as a mother who had just given birth to you.

Even with such a selfish family, I carried hope with each turned page that Park would be found. I hoped that her family would have a chance to write the wrongs of the past. I believe good writing does that: it makes you carry hope when there is none, it makes you even despair with characters as though they are real. I glanced through the eyes of these children as they saw their mother as a person not just a role and admitted their wrongs while wishing for a second chance.

Told with tenderness, Please Look at Mom is a story that will have readers exploring their own relationships with their moms.

Great review, Vasilly! I love the quote about Mom being born as Mom. It's so true that we don't think of parents as actual people until very late. It's also interesting that it seems like the more a mother sacrifices, the less appreciative or even resentful the kids can be. I read Doret's impassioned critique of the NPR piece (also here at http://coloronline.blogspot.com/2011/04/nprs-racially-inappropriate-look-at.html ) - it all gives you a lot to think about with this book!

Beautiful review. I might have to pick this one up.

Vasilly - This is one of the few times I am not wondering what was lost in translation.

That NPR....whatever it is just made me SO MAD. Then I come read this lovely review and a smile is now on my face.

I don't particularly care for stories about mother's guilt but that might well be due to my own issues. I'm more intrigued by the 2nd person narrator and the overall description of the story.

Personally, I don't know enough about 'Korean soap opera's to be turned off from this novel. Humph. If anything that harsh review/critique/arrogant letter made me decide to read this book and your review makes me want to bump it up in my list.

I agree with MissA. Your review is great and relates the beauty of this book in a way that the one on NPR did not.

It is a beautiful story. It made my heart ache and brought tears to my eyes as I thought of my own mother. And coincidentally, she stopped by as I was finishing. The author said in her interview that if anyone would want to call their mother after reading her book, she would be pleased. In that, I think she was successful.
I like this site :: Grizzly Bear Tours website