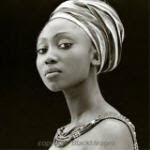 Color Me Brown is a feature in which we spotlight links relating to literature and multiculturalism. This ranges from reviews to discussions to interviews. Do leave your own CMB links in the comments so that we can stop by for a visit :)
Jane reviews Kindred by Octavia Butler
One thing about this book is that from the very beginning, it keeps you wanting to know more. I can guarantee that anyone who reads the prologue will want to read the rest, if only to figure out "how did this happen?!" And if you aren't pulled in by the prologue, I know that the first couple of pages will definitely get your attention. This book doesn't waste time in getting to the point: it goes right into the story, and the action doesn't stop until the very end. Once you pick this up, you will not want to stop reading... there are very few points in the novel where you can set it aside without wanting to pick it right back up again. In fact, two nights in a row I stayed up much later than I should have, just because I had to know what happened right then... it couldn't wait.

While he could listen to black radio stations (with music by black musicians) beginning only in 1958, Jimi had seen Elvis—the great White Wonder who fearlessly did his take on what was still considered Race music (gospel, jazz, blues)—in September of 1957, when he was 14, at a Seattle stadium. Before that, from the time he was very young, Jimi heard a wide variety of genres played (on record) and sung by his father right at home. As a teenager, he listened to Dean Martin and Frank Sinatra alongside Howlin’ Wolf, Lightnin’ Hopkins, B.B. King, and Chuck Berry. He had a place in his heart and mind for rock ‘n’ roll, the blues, jazz, pop, and gospel, and would later add Indian ragas, Flamenco guitar, Bach, and Handel to that heady mix. He even speculated about what “the blues scene” would be like on other planets, thoughts that arose from his love of science fiction and musings on extra-terrestrial life and intelligence.

Doret has an interview with award-winning author Francisco X. Stork (Marcelo in the Real World, The Last Summer of the Death Warriors)

2. Congratulations you are one of the chosen few. This year you were one of 16 Latino authors to write a MG/YA book. Why do you think this number still so small?

This is a very difficult question and I don’t know if I have the answer. Part of the answer lies in education and the need to encourage our children and young people to aspire to be writers and support them in the arduous training required to be a good one. Then there is the need for editors and publishers to accept meaningful works by Latino authors which do not fall under the category of “bestsellers.” Ultimately, I think it’s up to each one of us to do what we can to open up paths that will make it easier for other Latino authors to follow

The audio recording features one of the best vocal performances that I have come across. The narrator Grayce Wey is outstanding. As the adult Kimberly, Wey has just a hint of a Chinese accent, whereas when she is portraying the newly immigrated Kimberly her accent is much stronger. Accent sensitivity alone would have made Wey’s performance stand out, but her reading also captures Kim’s growth from childhood to adulthood and exploration of her feelings and needs along the way. Kwok uses phonetic spellings to convey Kimberly’s English language development and this translates well to audio format. Girl in Translation is classified by publishers and booksellers as adult fiction, but I hope the classification does not dissuade young adults (nor adult readers who prefer YA) from picking up this novel.

April at Good Books & Good Wine reviews Zora and Me by Victoria Bond and T.R. Simon

Zora And Me does not shy away from heavy topics. Lynching is briefly mentioned. Racism is glossed over, as in there is a subplot revolving around a woman who can pass for white, yet brings trouble with her wherever she goes. I thought this was done artfully. It’s there. It fits with the story, but doesn’t beat you over the head with it, which I think is an effective way of teaching children a message. I mean, kids are smart. They will understand if you allude to something.

I know I threw out a lot of history up top, but I have a bit more history to lay on you. Zora and Me is set in the first African American founded township. The residents of Eatonville, Florida had no fear of white. There is a whole passage on this, which again, I think is important to highlight. I think teaching children about their heritage is such a great way to instill pride. After all, African Americans did WAY more than be slaves and fight for civil rights, yet it seems that is all they are recognized for in children’s historical fiction, so YAY for a book that shows a different era of history than the stand-by.

So what awesome links did we miss?
Posted by MissA at 5:32 AM

I am so excited to read Zora and Me. Their Eyes Were Watching God is one of my all time favorite books and I've heard great things about Bond and simon's book.

Ari, just in case this wasn't showcased last week (sorry, I didn't actually check); here's a link to Elizabeth Bluemle post on how to sell multicultural books to White customers...