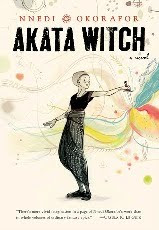 No matter which way you look at it, Sunny is an outsider. She lives in Nigeria with her family but spent almost the first decade of her life living in the United States. On top of that she’s an albino, used to the stares and taunts from people especially her classmates. But when strange things start happening: visions in a candle’s flames and the revelation that one of her classmates have magical abilities (and she does too), Sunny’s life drastically changes. She’s introduced to magic, people, and places that she didn’t even know existed. There’s a war coming between the forces of good and evil and it seems like Sunny will be in the middle of it.

There is so much to enjoy about Akata Witch. With many novels there’s an introduction into the character’s life before the action starts. Not with this book. Right from the very beginning readers are thrown into Sunny’s story as she sits alone in her room, watching a vision so intensely in the flame that her hair catches fire. Pretty much every chapter in this book is filled with action and readers are able to see Sunny’s growth as a girl who’s already sure of herself become a girl with that same self-confidence but who’s also willing to put herself in danger to help others.

With its setting in Nigeria the magic, myths, landscape, and culture that readers encounter in the book are different and refreshing from the magic that’s usually found in fantasy novels. Learning about the different ethnic groups and languages in Nigeria was slowly embedded in the story and it didn’t feel like an anthropology lesson.

My only gripe with the book is the disappointing ending. Sunny and her friends have to battle an evil wizard to stop an ancient monster from coming back into her world. It’s something they have to do by themselves. The battle happens but there’s almost no build-up of suspense and readers are left with this flat battle in the end. Even with the ending, I’m not going to let that stop me from reading everything else by Okorafor or the next book in this new series once it’s published. Recommended read for middle grade readers.
Posted by Vasilly at 12:00 PM

Can't wait to read this one! I love Zahrah the Windseeker and heard her talk about (and read from) Akata Witch recently - sounds fabulous!

I loved this one. The integration of Nigeria, the unique magic, it all created a book that is completely fresh and new.

definite not my kind of read but i will borrow or library it to try it, good review