Claudia from The Bottom of Heaven asked if I wanted to participate in Blogger's roundtable for Toni Morrison's The Bluest Eye, to celebrate its 40 anniversary. There was only one answer I could give YES.* First Happy Anniversary to the Bluest Eye. And thank you Claudia for asking me to participate. 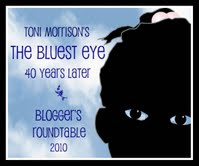 The first time I read The Bluest Eye I was 13 or 14 yrs old. I feel very lucky to have discovered Morrison so early. I missed Mildred Taylor, the same thing could've easily happened with Morrison. The Bluest Eye wasn't school reading, though I do recall my 9th grade English teacher, giving me a list of authors right before the beginning of summer. I am pretty sure Morrison's name was on the list. At the time I was reading a lot of genre fiction books by Stephen King or Silence of the Lambs by Thomas Harris. I was just discovering Black authors. Sure I read James Baldwin, Richard Wright even Donald Goines, but it was the ladies who had me.

Of course alot of The Bluest Eye, was over my head the first time I read it. Though that didn't matter since Morrison's characters and language felt familiar.

Forty years later I will always be thankful for Morrison's first novel. The Bluest Eye opened literary doors for many Black female authors.

Without it I may never of had the chance to read Tina McElroy Ansa, Toni Cade Bambara, Gaylor Naylor, Ntozake Shange, Alice Walker and all the other Black female authors whose stories speak to me like genre fiction never will.

There were a few topics, we could've tackled for this roundtable. I choose - Humanizing Cholly Breedlove: Vilified? Redeemed? How did you respond to this character or how might we read him today?

The first time through Cholly Breedlove was evil. Any man who would hit his wife, set his house of fire and rape is daughter couldn't be anything but evil. Years later when I reread The Bluest Eye, I payed closer attention and noticed there was more to Cholly. I felt compassion towards him.

This was the first time I had to reevaluate my perception towards a particular character after rereading a novel. So I decided to take an even closer look at Cholly.

Cholly Breedlove is Pecola's father. Pecola is the little girl who dreams and wishes for blue eyes. With blue eyes Pecola believes she will be beautiful and loved. Breedlove's are poor and ugly. One is bad but both is unforgivable.

Before Cholly becomes half of a marriage that thrives on conflict, he is a man with potential. Cholly almost lost his chance at being anything. When he was four years old his mother placed him on a junk railroad. He was saved by his great aunt Jimmy.

Cholly's aunt raised him until he was 14yrs old. When she's dies, Cholly ran away to find his father. His aunt took care of him but there was no love. Cholly's went searching for a male role model and someone to love him.

Many young men and women would've been disillusioned to the idea of love if they hadn't already experienced it by the time they were teenagers. But Cholly still believed in love and wasn't afraid seek it out. Since he wanted it so badly, I believe Cholly could've easily returned love properly if he knew how.

There isn't much interaction between Cholly and Pecola until the very end, since he doesn't know how to be a father. Though when one looks closely, its easy to see, if given the chance Cholly would've tried to learn how.

"One winter Pauline discovered she was pregnant. When she told Cholly, he surprised her by being pleased. He began to drink less and come home more often. They eased back into a relationship more like the early days of their marriage." (p121)

The first time I read the scene where Cholly raped Pecola, it was an act of violence with no redemption. The next time my heart went out for Cholly as well. He is a Black man who must admit he failed to protect his daughter from a world that more than willingly to destroy her.

"Her back hunched that way, her head to one side as though crouching from a permanent and unrelieved blow. Why did she have to look so whipped? She was a child - unburdened- why wasn't she happy? The clear statement of her misery was an accusation. He wanted to break her neck - but tenderly. Guilt and impotence rose in a bilious duet. (p161)

It must have been hard for Cholly to face his family knowing (or feeling as if) he failed them, especially Pecola. Daughters are supposed to be protected. Cholly wondered what he could give his daughter, this makes me believe, if Cholly had anything to give he would.

What could he do for her ever? What give her? What could a burned out Black man say to the hunched back of his eleven year old daughter? If he looked into her face, he would see those haunted, loving eyes. The hauntedness would irritate him the love would move him to fury. How dare she love him? Hadn't she any sense at all? What was he supposed to do about that? Return it? How? What could his colloused hands produce to make her smile? What of his knowledge of the world and of life could be useful to her? What could his heavy arms and befuddled brain accomplish that would earn him his own respect, that would in return allow him to accept her love?

Cholly was as much a victim as Pecola. Every time I read The Bluest Eye, I see Cholly clearer. There's little boy who almost never was, the boy who went unloved, the young man who had his first sexual experience ruined by two White men, the young man who was dismissed by the father he never knew, and a man who never learned how to love.

I'm so thrilled for this forum on TBE. It is exciting for me to be finding new blogs to read and to discuss the issues of the book in a meaningful manner.

Cholly is a character worth a great deal of discussion. When I think of him, I think of that couch... a metaphor like so many others in that book. Something with promise and a symbol of pride and hardwork becomes damaged -- and isn't quite right afterward. But beyond that, it becomes a symbol of things that went wrong. Things that are reminders of pain and frustration.

I think that is what Pecola becomes. A reminder that Cholly isn't -- that he can't be -- what he once believed he could be. (Which is to say, I agree very much with what you've written!) Writing him so sympathetically is, I think, very important to this story. The threat and fear of 'the black man' is so pervasive and negative, she had to deal with this in a very real way -- he had to be broken, too, he had to have a heart. This doesn't make him forgivable, but it makes him more understandable.

Great post, Doret. Morrison's decision to give Cholly a life and a backstory was really disturbing to me at first too. I'm still a little troubled by the way Morrison puts us inside his head during the rape scene while still leaving so much doubt as to what what he and Pecola were experiencing. I think this ambiguity makes his actions all the more chilling. But Morrison achieves in making every character - with the exception, maybe, of Maureen Peal - complex and multi-dimensional. It takes a very good writer to pull something like that off!

@coldspaghetti - I hadn't thought of the couch as a comparison; that works really well!

Finding compassion for Cholly is a challenge for me and a tribute to Morrison's brilliance as a writer.

This blog post reminded me of a recent post by author Tayari Jones about finding empathy for the characters in her writing. She said:

"One thing I like to do is to write journal entries in the voices of other people, or even characters in my books......The challenge is that you have to discover something new about the person or character. If your exercise reveals only what you came to the page with in the first place, then you have not tapped into the empathy you are going to need to write the story you want to write. The thing is that you are really going to have to want to understand that person, which means you may have to let go of that anger."

I would love to know how Morrison was able to let go of her anger when thinking about Cholly and see him as human.

Thanks everyone for commenting in spite of the posting glich. I believed I fixed it.

coldspaghetti- I loved the couch metaphor. And like Claudia, I missed the comparrison with Pecola.

But now that you part it out its seems so clear. Pecola's supposed lack of pretty was one more reason for the Breedlove parents to give in.

I couldn't forgive Cholly for the rape but it was hard to hate him when I knew the reason behind his violence.

Claudia - Maureen Peal didn't stay long but I think she served her purpose. Though now I do wonder why was she nice to Pecola that one time.

Was it because she was pretty and she could afford to be? Or was she simply a nice person. It was very hard to get a read on Maureen's personility with the young narrator.

Though I would like to think it was because Maureen was nice since she did try to engage the young narrator, Claudia in conversations near their lockers.

Wdjenkins - I agree what Morrison did with Cholly took some serious skill. A female author writing Cholly this way, had to be a risk.

If the Bluest Eye was written now I wonder if the editors would ask Morrison to not make Cholly such an empathic character.

Doret, thank you for this wonderful post and for the new light (new for me) you shed on Cholly.

I'm still not healed from the mark the character left on me. I'm not sure one can read Morrison's books without being touched and/or scarred in some ways (not saying this with a negative connotation).

I read this book when I was way too young. In 5th grade. It definitely left an impact on me. I should reread so I can more actively participate!

I do remember finding it impossible to forgive Cholly and I was disturbed that we were in his head during the rape scene. But reading this post, does make me feel for him. I felt bad that he had such a tough childhood (don't remember the white men scene though) and it does become clear that he is frustrated with his lack of ability to give his family what they need.

Good discussion, thanks for posting!

The performance at UMD of The Bluest Eye was phenomenal because of the depth Bakari Wilder brought the performance. He managed to capture the monstrousness of Cholly's act, and to highlight the monstrous way he'd been treated by society.