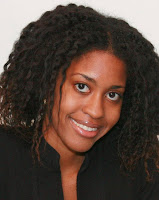 Thanks to Doret, we present an interview with author, Debbie Rigaud. You can find Part I of their interview at Happy Nappy Bookseller and we'll follow up Doret's review of Perfect Shot tomorrow.

Perfect Shot is your first novel, though you've been published before,
including an essay for a collection called Transculturalism. Can you tell us a little about "Voodoo Ray?"

Sure. Let me first point out that I had nothing to do with the title of my essay, "Voodoo Ray." It was only when the book was already published that I saw the title it was given. But I was grateful for the opportunity to
contribute a piece about growing up Haitian-American. I guess the essay grew from my frustration with narrow and often rude reactions to my Haitian heritage. Once people learned about my background, their response usually was voodoo, boat people, ugly people, or that poorest country phrase we've heard a zillion times. To my face.

Seldom did it register for most people to mention Haiti's unique history. A hugely successful rebellion took place there, albeit at a significant cost. I've always felt that Haitians sacrificed so much for the sake of human rights throughout the New World, yet their descendants are made to feel ashamed or on the defense about who they are and where they come from. *quietly steps down from soap box*

I did do a slight double take at the title. Debbie, please get back on your soap box. How did the Haitian revoultion impact human rights of the New World? Do you have a family connection to the revoultion?

LOL! The reason I don't like to stay in my soapbox for too long is because at heart, I'm really just a new age girlie who'd rather join hands and sing Kumbaya. But my experiences in life have taught me that it's important to know a bit of your history. Speaking of which, The Black Jacobins by C.L.R. James is a good book about the Haitian revolution. Andyes, on my dad's side, I do have a connection to the revolution, a great-great-great (great?) grandfather was a revolutionary leader.

I thought your essay in Transculturalism was informative, powerful and question raising. Why do you think Toussaint Louverture and other Haitian revolutionaries go unrecognized?

Good question. It could have to do with the singular role that they play in history. These revolutionary heroes led successful slave rebellions against celebrated giants like Napoleon and formidable forces like the British regiments. I had a discussion with a British friend, who thought I was making wild claims when I told him about the Haitian Revolution. Only after he consulted history books and did independent research did he believe me. It's always cool when a friendly exchange leads us to learn something fascinating about a persons, back story.

I agree, its nice when people actually listen (and hear) and learn from each other.It's very rare especially when politics and nationalities are involved. Debbie, can you tell us a little about your recent fund-raiser for Haiti?

Here in Bermuda, there are two local charities who have a history of doing amazing work in Haiti. After the quake, a group of us organized a few fundraisers in support of these two charities. Both of which have medical teams treating survivors in and outside of the Haitian capital. Most recently, we held an island-wide tag day that helped raised thousands of dollars for Haiti.

Everytime I hear of a new fund-raiser for Haiti, it gives me hope and reminds me that people still care..

What do you think will happen in Haiti? What would you like to see happen?

Like everyone else, I hope that the country rebuilds with an improved infrastructure. Among Haitian-Americans and other Haitians living abroad, there's been talk of playing a significant role in that process, which is great. A lot of people who left Haiti decades ago are planning on returning home to lend their expertise or assist in any capacity that they can.

Debbie- Thank you so much for taking the time to answer these questions. I hope people will read this and be encouraged to look for more answers.

Yes. And I also hope that the next time a teen is selected to take on a singular role, she's inspired to instead ask, Why not me?

I enjoyed this interview very much.

Get back on that soapbox, Ms. Regaud! We're listening. Although, we're also available for that Kumbaya sing-along...

Looking forward to the review. Thank you for informing me and making me laugh.

Susan, thank you for introducing us to another author of color. I agree and am sorry that people only focus on the one side of a country rather than every facet of a country.

I have become fascinated with Haiti. For example, the water there, I see on tv, is so clean and a beautiful color. It takes your breath away. I find the people including you quite handsome and beautiful. I resent it when people characterize an ethnic group with their narrow vision. It's very sad. I feel sorry for the times I have done it. I hope my narrow vision will totally shut down and leave me free to realize the beauty and significance of all people on earth. Thank you Doret and Debbie Regaud.

i am saddened by the fact that i knew so little about the Haitian revolution. get back on that soapbox anytime!

Great interview Doret! I've had The Black Jacobins on my shelf for at least two years; I will read it this year. I think it's pertinent I do to keep the dialogue going on Haiti and remind people that assistance is needed on a long term basis. I agree that Haiti will need its citizens who've been educated and trained abroad to come back and rebuild the infrastructure. Can't wait to read the review of Perfect Shot.

What a wonderfully informative interview! We learned about Touissant L'Overture this year and last year but not in too much detail, I think it is so cool, Touissant is my hero. The French treated him so awfully. I believe Haiti was the first successful Black/slave rebellion?

I'll have to check out Transculturalism, the book sounds great and I'm espcially intrigued by your essay :)

I'll be doing my Haiti review week in March and I think it will help keep the efforts to help Haiti in the eye of the public because people tend to forget easily after the first wave.

And stay on that soapbox!

I'm glad that Doret gently lured me to that soapbox. I might not have gone there on my own. It was great having this discussion and sharing it with you all. Thanks for all of your feedback!

At first I wondered why Doret would interview Debbie the same week she was on Brown Bookshelf, but I'm SO glad she did b/c this is a whole other (yet related) conversation, and equally important...good job, Doret!