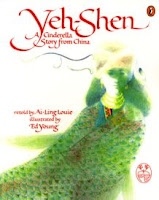 
The story of Yeh-Shen, one of the oldest versions of Cinderella, dates from the T'ang dynasty in China (618-907 A.D.). It even predates the oldest European version of Cinderella, which is an Italian story from 1634.

Yeh-Shen is an orphan who lives with her stepmother and stepsister. She is given the heaviest and most unpleasant chores and not enough food to eat because her stepmother resents how Yeh-Shen is much more beautiful than her own daughter. Yeh-Shen's only friend is a fish in a pond. Her stepmother kills the fish and cooks it for dinner. An old sage reveals to Yeh-Shen that the bones of the fish are filled with a powerful spirit. Whenever Yeh-Shen is in serious need, she can kneel before the fish bones and they will grant her heart's desire.

One year, Yeh-Shen longs to go to the village spring festival, but her stepmother will not allow her. Yeh-Shen kneels before the fish bones and wishes to go to the festival. Immediately she finds herself in an azure blue gown, kingfisher feather cloak, and gold slippers. At the festival, people wonder who Yeh-Shen is. She is so beautiful that she seems like a heavenly being. When her stepsister sees her, Yeh-Shen runs home and loses one of her gold slippers along the way.

A villager finds the slipper and sells it to a merchant who in turn gives it to a king. The king is so fascinated by the tiny slipper that he searches for its owner. The slipper is placed in a pavilion by the road and many women, including Yeh-Shen's stepmother and stepsister, try it on in the hopes of claiming it. Yeh-Shen doesn't go to the pavilion until very late at night and when she takes the slipper, at first the king thinks that she is a thief. Then he notices that Yeh-Shen is beautiful and has the tiniest feet he has ever seen. He follows Yeh-Shen home and asks her to put on the slippers. As soon as Yeh-Shen is wearing the slippers, she once again finds herself in an azure blue gown and a kingfisher feather cloak. The king falls in love with her and they live happily ever after.

Yeh-Shen's story may seem even more fantastical than the Disney version of Cinderella, but because of Ai-Ling Louie's prose and storytelling skills and Ed Young's illustrations, readers young and young at heart will eat this book up. The watercolor and colored pencil illustrations are uncannily both detailed and impressionistic. They are sublime, as per usual with Young's illustrations.

What I found most interesting about Yeh-Shen: A Cinderella Story from China is how it depicts certain elements of ancient Chinese culture: the desirability of tiny feet on a woman and the association of fish with good fortune.

Yeh-Shen: A Cinderella Story from China is a must read for every fan of Cinderella or fairy tales in general.
Posted by Tarie Sabido at 2:07 PM

Oh, even the cover is beautiful.

I love cultural reassignments of fairytales, I really do. That killing of her pet fish? SO COLD. AND it's perfect -- the perfect hint of menace for the 4-8 year old set. And then a kingfisher feather cloak? You know every little kid will next Google a Kingfisher, and thus increase their little knowledge store. Love it.

Hi, Tanita! I hadn't thought that way about the killing of the pet fish and the kingfisher feather cloak. You are so right! So now I love the book even more. :)

I LOVE cultural Cinderella retellings! I missed this one as a child and I will have to read it (my school library didn't get cultural Cinderella retellings until I was in 5th grade and people thought I was too old to be reading Cinderellas. But they were so good and it was fun to learn about all the different cultures!) Thanks for this review :) And I agree with Tanita, the book will expand knowledge because I don't know what a kingfisher is either so off to Google I go.

Everyone, Sunday is Chinese New Year. Don't forget to eat some "glutinous rice cakes" or moon cakes and welcome the Year of the Tiger!

thank you for pointing to the cultural Chinese elements of the story. The fact that "Cinderalla" lost her shoe is even more symbolic, I believe, when you are reminded that feet were/are an important asset of beauty in the Chinese culture (and elswhere, thinking how we ornate our feet in Africa, but I'm digressing here!)...

I look forward to reading it as well. I'm sure it's a keeper. Thanks again. :)

what a great way to ring in the new year--thanks for this fascinating review, Tarie!

Nathalie, we should talk sometime about assets of beauty in different cultures. =D

i have such a hard time with the Cinderella story. Even as a kid, I wasn't a fan because all she did was look a certain way to find love. I think this idea of cultural retelling it fascinating but I still wish we could reinvent the Cinderella tale. Kind of like they did in the film "Ever After" where there is a stronger female lead.

Read Ash by Malinda Lo. The MC is not preoccupied with love and when she does fall in love, she fall for a girl who is a hunter and not a prince. In other words, she falls for another servant.

Thanks for sharing this story. I like learning about the different cultural views on this universal story.

Thank you too, Laura! =D