I see that we're all, each and every one of us, like little palaces with invaluable, one-of-a-kind treasures inside. And if there's a part of ourselves that we don't claim, whether we forget to, choose not to, or feel forced to, we put that unique, precious piece outside on the porch. And we let the world know we don't want it, it's not welcome inside. Then the world is free to treat that precious valuable in whatever way it wants. But it's still a part of us even though we've closed the door. And at some point we have to come back outside to get it, in whatever shape it's in.~ Samar.

Beautiful. To me the above quote is absolutely beautiful, almost poetic in nature. I love it (it's a little long I know)! I've been waiting FOREVER to get this book. Well let me just say it was well worth the wait!

Uncle Sandeep is Samar's Sikh uncle who shows up on Samar's doorstep one day, shortly after 9/11. He hasn't seen Samar since she was two, Uncle Sandeep and his parents are estranged from Samar's mom (his sister). Samar is raised by her single mom, who rebelled against her parents strict traditions of their Sikh (Sikh is a religion. Samar is Sikh, Punjabi and Indian) heritage. She left them and never looked back. Samar knows nothing about her Sikh heritage or her family. Uncle Sandeep's appearance makes her want to learn more about her family and heritage. Especially after certain incidents occur against her uncle and Samar is called a coconut. A coconut is someone "who is brown on the outside, white on the inside."

This book made me angry. Angry at all the intolerance and ignorance there is in this world. The whole 'all Muslims/Middle Eastern people are terrorists' stereotype (like many stereotypes) is so dumb, and the people in this book say that but then they make comments toward Samar and her uncle and they aren't even Middle Eastern or Muslim! The incidents in this book made me so mad. I loved the comparison the author drew between the way the Japanese and Japanese-Americans were treated during WWII (with fear and ignorance, being put in internment camps) and the way Americans were reacting with fear and paranoia about Muslims after 9/11. I'd thought the same thing myself.The coconut label made me sad. It's the Indian (I think) equivalent of the African American "oreo" (black on the outside, white on the inside). How many people have been called oreos just because they try to get an education and talk properly? I understand why you might be called a coconut or oreo if you don't know your heritage, but if you want to learn it (like Samar) than you shouldn't be called a 'coconut' that just makes you more afraid to branch out and meet people like you and learn. You fear that they will just see you as a 'coconut' and dismiss you. Same goes for so-called 'oreos'.

Another issue that other ethnicities can relate to is the colorism issue (light is better than dark, you want to be light not dark). I'm not sure if this is an issue in all the Asian and Native American communities, but it definitely is in the Latino, African American and apparently Indian community. Samar's grandmother and mother both mention the topic. It was enlightening to me, because I didn't know that Indians viewed having lighter skin as being better than having dark skin. Yet another issue that needs to be addressed. *sigh*

My favorite character was Uncle Sandeep. He was so wise, calm and brave. He would rock as an uncle (mine is pretty cool too though!)! I really admire him for taking the first step in trying to get back into his sister and nieces life. That takes courage and humility.

I learned a lot from this book. For example, some Sikh families don't allow shaving. So girls that means no shaving legs or armpits, boys have beards. I can't imagine not being able to shave my armpits at least! Some of the rules seemed strict to me (there were times when I was reading this book that I told myself that I would leave my family if they didn't allow me to do x,y,z), but I reminded myself that I'm an outsider and I shouldn't judge. This book will open your eyes to a new culture and way of thinking. A book like this needed to be written, thank you Mrs. Memingr for writing it! I highly recommend this book. 8th grade and up.
_________________________________________________ 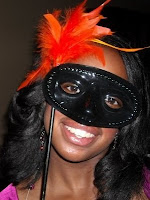 Ari says she's sarcastic, caring, slightly crazy teenager. She loves to read, listen to music, dance and have fun. She's been reading seriously since second grade. Proud to be black. Ari is one of Color Online's CORA girls. They rock. You'll hear more about them. Stay tuned. In the meantime, check out Ari's blog, Reading In Color.

OK Susan, I'm going to get back with you after I read the book, then we'll compare notes!

This is Ari's review. Though I did read it and I loved it.

Ari,
I hate the exploitative cover but I love your review! You are truly "a little palace" yourself! So glad you're blogging!

You're the second adult who has says she doesn't like the cover. I wonder what teens think.

I remember Neesha and Mitali talking how hard it is to convince publishers to show South Asian faces on the covers.

aw thanks rhapsody! That's one of the nicest things anyone has ever said about me.
I'm not a big fan of the cover either. I wish that it had an Asian girl's face on it. Or that it had no face but not just a girl wearing a belly-baring t-shirt. Covers *shakes head sadly*

Very good review! I want to read this. And I LOVE that quote. I agree about the cover. Is it so hard to show a face that isn't white?

I don't usually like to comment on discussions about me or my work (I like people to feel free to state their thoughts and impressions without worrying about hurting the author's feelings), but I wanted to jump in here and say a few things about the cover for SHINE.

Personally, I think the cover is striking, if only because it is a hip, tough South Asian girl--the likes of which we rarely see out in the "wild." When I was a teen, I would absolutely have *drooled* if I saw something like this on a book shelf.

However, having said that, when my editor first asked for my thoughts on a cover, my immediate response was, "I'm fine with anything except a headless woman." :)

You can see how influential *my* opinion was. My editor did say that she put in a suggestion in for a "modern-looking" young Indian woman's face on the cover (we can discuss another time what "modern-looking" means). So, I'm thrilled that my editor "got" it and was pushing for something non-objectifying and representative of the character.

There was a problem, though. Apparently, another novel had been published the same year with an Indian woman's face on it. Obviously we couldn't have TWO novels with Indian women's faces on them in the SAME year.

So the plan was changed. And, since I had another issue with the cover, I chose to pick my battles. The one I fought was more important to me, and the cover was changed to reflect my feedback (which I am VERY happy about), so I was happier with how things turned out in the end.

Clearly, there is still a lot of work to be done, and we keep fighting as hard as we can as authors, agents, editors, bloggers, librarians, booksellers, and others who care, but oftentimes there are many battles that come at us at once, and we have to choose the ones we're going to take on.

I've written a bit about my cover story here: http://www.racialicious.com/2009/07/29/lying-on-the-cover/
and will write more on my own blog in the next day or so.

I'm so glad for forums like this where these kinds of exchanges can take place. Thank you so much, Susan and Ari!

I understand you hanging back and I did for similar reasons. Now that you did, I feel free to say what I think.

I don't like images that objectify women. And I get the belly bothers some. For me though, I see a lot of teens and I get that for many of them, this is hardly any skin and it's not trashy. I'd say the same. The model has the body, she's young and the look is tasteful for what it is. I love the colors. I also live in a community that is largely Indian and let me tell you, most girls could not wear this. American Desai or not, most parents in my area wouldn't allow their daughters' this kind of freedom so I like the cover because it reflects the Samar's mom willingness to let Sam decide what is appropriate and what is not.

And Maude do I know about having to pick your battles. I know it's like pulling teeth to get a face on the cover. I think the shot does mirror who Samar is. She saw herself as American first. She grew into her cultural identity.

I could have done without the suggestion of Mike but again, this is representative of what Samar had to confront for herself. She realized things about him that she didn't know or denied.

Lastly, I work in a library. Ask me what gets picked up. The belly top suggest cool, the colors work. The book gets picked up and that's what you want: the reader to give it a chance.

"I could have done without the suggestion of Mike..."

Ha! LOL. I thought the same thing, but my husband said that he didn't even notice him -- that he sort of blends into the background, so I tried to work with it :).

I hope my post didn't come off as defensive. As anyone who's read my posts online would know, I am all about accountability. I just wanted to provide readers with an insider's perspective on the process.

Thanks for sharing your experiences and perceptions, too, Susan. Very interesting.

I read you regularly. You articles are very impressive.

No, you don't come off defensive, and I think behind the Liar controversy most readers here know that authors have little say in cover choices.

I love the sound of this book, and I think I'd learn a lot from it too. I didn't know about "coconut", though I knew about "oreo" because when I was in highschool a classmate of mine got called that a lot - she was into indie rock, and apparently she was expected to only like hip-hop :/

And I wish the cover showed the model's face too. Just this morning I finished My Most Excellent Year, which is a great book with 3 teen narrators: one white, one Latina and one Asian. The cover shows the three of them, but their faces are hidden by an umbrella :(

Neesha I love your posts. Especially the post you did on your cover and the guest blogging post you did for Justine!
I'm glad you're happy with the cover, but I really wish more authors got a say in their covers. I'm a little unobservant because I didn't even notice Mike! But now I see him.
Susan makes a good point, that based on what the model is wearing, it shows the freedom Samar had to wear whatever she wanted, unlike some other Indian girls.