I know its been awhile for any post but I am in the mood for a quick unexpected update. Since it's late in the evening I will just freestyle it and see what happens.
A much belated and well deserved Congratulations to Jesmyn Ward, her novel Salvage the Bones was a 2011 National Book Award Finalist. I loved Salvage the Bones. The voice of Ward's main character Esch was perfect, at times I couldn't help comparing her to the young protagonists in Toni Morrison's Bluest Eye. I usually make it a point not to do Morrison comparison, its too much to live up to plus every author has their own unique style, but in this case I believe its warranted. 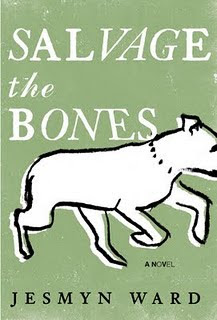 Congratulations to Nnedi Okorafor, her novel Who Fears Death won World Fantasy Award for best novel. Of the six nominees in this category, three, Okorafor, Jemisin and Lord were female authors of color. The final book in N.K. Jemisin, Inheritance trilogy, The Kingdom of Gods was released in October . I am all caught up with Okorafor and Jemisin, I love Who Fears Death and the Inheritance trilogy. I just haven't gotten around to reading Karen Lord's Redemption in Indigo, even though I've only heard great things about it. Once I read it I will probably be kicking myself for waiting so long to pick it up.

One last Congrats goes out to Danielle Evans, author of Before You Suffocate Your Own Fool Self for being selected as one of 5 author under 35 by The National Book Award Foundation. Evan's short story debut collection was ridiciously good. If you haven't read Before You Suffocate Your Own Fool Self you are seriously missing out. If you are avoiding it because you don't like short stories, trust me you'll like this collection. Evan's Color Online Interview

Though we are still in 2011, I already know The Whole Story Half a Girl by Veera Hiranandani is a favorite middle grade debut of 2012, no I am not psychic but I do use netgalley. I usually don't mention books so far from the release date, but apparently I am doing a lot of things I usually don't do. (And ladies and gentlemen that there is the beauty of freestyle) But back to Hiranandani wonderful debut.

The main character Sonia is half Indian and Jewish, her father has lost his job. She must come to terms with the changes her family must make. One of the things I loved about this novel is how current it is, many readers will be able to relate to a parent being out of work. Sonia's father also suffers from depression. A mental illness that is still taboo amongst people of color and the author handles it with the care it deserves. This could've easily become an issues novel but Hiranandani doesn't allow that to happen, yet another reason why I enjoyed this debut so much.

Vasilly another contributor will be posting a Color Online Interview in the near future. I won't say who with but I am very very excited, and if this author isn't on some 2011 best of list I will be very very pissed.

Labels: 2011 national book award finalist, before you suffocate your own fool self, danielle evans, jesmyn ward, salvage the bones, veera hiranandani, whole story half a girl

We definitely need to start posting here again! I haven't read Salvage the Bones yet but luckily I have a copy of it from the library. If it reminds you of The Bluest Eye, I know I'm going to love it.

Vasilly I can't wait to read the interview. Enjoy Salvage the Bones. I should be posting my review of that soon.