Thoughts on Heidi W. Durrow's The Girl Who Fell From the Sky 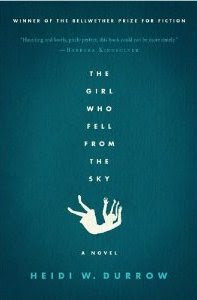 The Girl Who Fell From the Sky

It’s a funny thing to think about: moving toward extinction. And I think of how maybe I’m already extinct in a strange way – there’s no way to make another me: at least I can’t do it. But that doesn’t matter anyway because I never want to have kids.

The Girl Who Fell From The Sky is the debut novel from Heidi W. Durrow. It’s also the winner of the Bellwether Prize for Socially Engaged Fiction, which was founded by Barbara Kingsolver.

The story tells the life of Rachel, the only survivor of tragic, mysterious circumstances surrounding the death of her three siblings and their mother. Rachel is also biracial, the daughter of a white Danish mother and African-American father. After the death of her family members, Rachel is sent to live with her paternal grandmother and has to learn how to navigate in a country where she’s considered black, something she didn’t think much about before. Told from the perspective of Rachel, her mother Nella, and those who knew her family, The Girl Who Fell From the Sky is an engaging read of one girl’s struggle to live after the death of those she loved most.

This year I’m learning a lot about my reading. I’ve learned that I don’t read many books that feature:

· the elderly as protagonists

Where have I been? In today’s society with so many people being of several races and cultures, I can’t believe I’ve ignored this. Luckily reading this book brought it to my attention. As a young girl, not only does Rachel has to deal with everything that has happened, she also has to learn how to deal with so much attention to both who she is physically, her long fuzzy hair that makes girls in her class want to fight her, blue eyes, and light brown skin to who she is as a person, someone who loves to read and tries to understand what being black means in America during the 1980s.

The problem is that as interesting and engaging as the book was, I didn’t connect very well to Rachel. Readers understand this character through her words and interactions with others but it wasn’t enough.

I had the same problem with Rachel’s mother, Nella. Nella is a young Danish woman living in Europe when she meets Roger, an African-American man stationed at a nearby base. They soon marry and have children before Nella leaves Roger and flees to the United States with their children. She struggles with everything before she finally makes a terrifying decision.

*spoiler spoiler I need to understand her decision with the same depth that I understood a similar decision in Toni Morrison’s Beloved. *spoiler over

Though I didn’t get the connection I needed, I still think this was an excellent read. My rating: 4 out of 5 stars.

This review was originally posted at 1330v.

I had such high hopes for this book and it didn't really work for me at the level I had hoped. I think I expected more about race so maybe that's my problem for expecting something it wasn't

I enjoyed this book alot. My favorite point of view was Brick's. I like how the story came together. Rachel was a bit annoying, a bit stereotypical, but at the same time an individual person. Some of the choices she made had me frustrated, but she came off as a real person with flaws.

An interesting thing is that I was telling the plot about this story to my mom and she said she had read something in the newspaper about something similar happening.

Stopped by to say hey! I know it's been a long time. FB & Twitter have me shamefully distracted me from blogs lately. Nice to know this one is still doing the thing! Thanks for all you do!

Ugh! I still haven't read my copy of this book! darn! but one of the reasons I know I have shied away (unintentionally) from books with biracial characters (and my son is biracial!) is the whole idea of the "tragic mulatto" narrative...which has been constructed since slavery. In the end I feel as though I end up unintentionally "punishing" these types of books through my lack of interest. But the thing is I want more quality books about, well, yes, ALL people. And not to mention books with strong, positive, real Black women...I mean, Push, (no insult to Saphire) is what we have to work with!