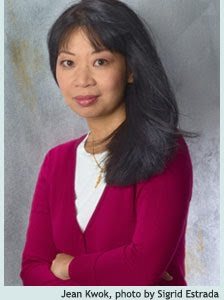 Can you tell us a little about Girl in Translation?

Girl in Translation is the story of a young Chinese immigrant girl named Kimberly Chang who starts leading a double life: exceptional school girl by day and a factory worker in the evenings. Since she needs to hide the harder truths of her life – her extreme poverty, the weight of her family’s future resting on her shoulders—she learns to constantly translate not just her language but herself, back and forth, between the worlds she lives in. In the end, she needs to choose between the worlds she straddles and the two very different young men who love her.

Girl in Translation is a work of fiction but it is based upon my own life. Like my characters Kimberly and her mother, my family and I also immigrated from Hong Kong to New York City when I was a child. We too went from being fairly well off to needing to start our lives all over again. When my family started working in a sweatshop in Chinatown to survive, I had to go along to help work, even though I was only five years old. We lived in an apartment that didn’t have any central heating, and was swarming with cockroaches and rats. The only way to have any warmth at all was to keep our oven on throughout the long bitter winters. Fortunately, like Kimberly, I also had a talent for school. Although I struggled initially, I was soon able to learn English and ultimately went on to study at Harvard.

When Kimberly and her mother moved into their first rundown apartment I could see all of its cracks and roaches. I even felt the cold. The stories visual strength is due in part to your connection to the main character. So why a novel and not a memoir?

The main reason I chose fiction rather than memoir was because I never wanted to talk about my own background. I thought I’d be able to hide behind the fact that this is a novel but when the book began to receive a great deal of international attention, it became clear that the autobiographical aspect was an essential part of my message. People wanted to know if working class immigrants could actually live under such harsh circumstances, and I understood it was important to answer, “Yes.”

The book has been received so warmly by critics and readers alike that my shame has now turned into pride. I am glad I was able to tell our story because I know there are so many other Americans in similar situations.

There's a beautiful ease to this story. Once I started reading I couldn't put it down. What to you think made this story such a page turner?

I’m always so glad to hear that. I did work hard on making it that way. Another reason I chose to write a novel instead of a memoir was because in order to make the book a compelling read, I needed to experiment with language and structure in ways that are not possible in a memoir. It took me ten years to learn enough craft to write this book.

I was interested in the idea of using the first person narrator – the “I” voice– in a new way. I wanted to put the reader into the head and heart of a Chinese person and there by give readers the experience of actually becoming a Chinese immigrant for the course of my novel: to hear Chinese like a native speaker and to hear their own language as gibberish. People tell me that they’d never realized what was like to be intelligent and articulate in their own language but to come across as very simple in a foreign language. This was something that my own mother experienced every day, since she never learned to speak English properly.

Although this novel was drawn from my own life, I used everything I knew to put interesting characters in challenging situations so that the reader wouldn’tbe able to put the book down. I hoped readers would be both entertained and enlightened.

I loved Girl in Translation. I only wondered at Kimberly's straight A's. It made more sense after reading your FAQ's. Still why not one B?

This is a good point but I don’t think Kimberly would have gotten any B’s. Although she struggled with many aspects of American society, school was her gift. And she was serious about it. I felt very much the same way as a child. I took school seriously because I knew it was my only way out of the factory. I couldn’t afford to moan and groan and slack off because if I did, I’d probably be working as a seamstress in a sweatshop right now. Like Kimberly, I was also incredibly lucky to be able to do well in school. That was something I was born with and I’ve always been extremely grateful for it.

I was stunned by the reaction the novel got. Most people who work in sweatshops as children grow up to be adults who work in sweatshops. They don’t generally become writers. I never expected to actually succeed as a writer, and I certainly never thought my debut novel would be published in 15 countries, become a New York Times bestseller or win awards.

The funny thing is that I’d Googled myself before the book came out and the Jean Kwok who showed up was the one who worked for the Hands On condom factory (NOT me, by the way)! I just Googled myself today in response to this question and found more than 5 million hits.

I can’t remember the very first review but I do remember being shocked as the novel kept getting chosen to be featured by publications like the New York Times, USA Today, People, and Vogue. You can see some of the reviews here

This was just my little book, which I had written all alone in the attic of my home! I kept pinching myself. I was sure for a very long time that this was one big hallucination. I still wonder sometimes.

This would make a great book club selection, especially since the paperback has just been released. Have you had an opportunity to interact with any book clubs?

I love it when book clubs choose the book. It was actually a Blue Ribbon featured pick for all of the following book clubs: Book of the Month, Doubleday, Literary Guild, Large Print, the Lifestyle Clubs, Rhapsody, and Book of the Month Club 2. I was very surprised and honored when this happened.

Many people have told me that their book clubs have chosen the book and sometimes, I talk to book clubs either in person, by phone or Skype. It’s always a lot of fun.

What's your favorite part of a book tour? What are your book tour essentials?

No question about it – my favorite part of a book tour is meeting the readers.It is so wonderful to hear from people who have read the book. Some tell me how it made them think about their own backgrounds or that of someone they know. Some just say it helped them become more aware. All of those kind words mean so much to me. It makes it all worthwhile.

I split my luggage into two smallbags: one I check and one I keep with me at all times. If my checked bag is lost, it will never catch up to me on a book tour because I’m in a different city practically every day. I would need to be able to complete the tour with the contents of the other bag alone. So if you consider that bag, the one I always keep with me, to contain my book tour essentials, then this is what is in it:

Book tour schedule (tells me exactly what to do and where to go and who to call for help) Girl in Translation (so I can read from it, the paperback because it’s lighter) Wallet, Camera, Laptop, USB stick, presenter and notes (for when I use Powerpoint slides to showphotos with my talks) Cell phone, E-book reader/Poetry (because I love poetry, and poetry books are thin) Makeup (enough to prepare for a formal, filmed event) One nice outfit, Heels (to go with nice outfit) Toiletries (in mini form, enough to get through a day) Silk scarf (for temperature changes) Solid perfume (to make me feel happy and calm)

What are you working on now?
I am hoping to finish my next book very soon! It’s set in the Chinese immigrant community and in the professional ballroom dance world. I worked as a professional ballroom dancer for about three years in between my Bachelor’s degree at Harvard and my Masters at Columbia University. My next novel will be both a Chinese immigrant story and a love story set in the dance world.

*photo by Sigrid Estrada
Posted by Doret at 9:00 AM

I loved Girl in Translation so thank you for a wonderful interview!

This is such a great interview. I just started reading Girl in Translation this morning. I had to reread the first two paragraphs because they sounded so good.

Helen and Vasilly - Thank, I love reading books that are too good to put done like Girl in Translation tha

Thanks so much for posting this interview! I've linked it to my Facebook fan page here:

I really appreciate the kind remarks about my book as well in the comments - you guys made my day!