That Good Ole South Is No More

Toni a co-worker (until the 15th) sent me a link to a recent post by author Tayari Jones, called Southern, But No Belle about this recent photograph in the April edition of Vanity Fair. 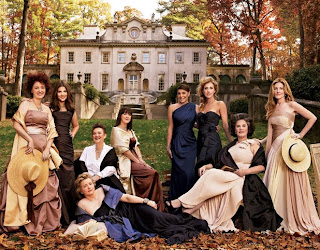 I hate the old Southern lets remember the good old days look. Jones says it best -
The women are posed in front of the Swan House which is not a plantation house, it just vibes like one. This is one of Atlanta’s hallmarks, these not-plantations. Since Atlanta was burned in the Civil War, there are no ante-bellum structures to romanticize, so the good citizens of my hometown make do with lavish Victorians. My favorite example is the Margaret Mitchell House. It was built in the 1900s, long after Rhett Butler said he didn’t give a damn, but it feels like Tara and that’s all that matters. When we agree to accept an illusion, it takes on a kind of truth and this is why the photo spread is so disturbing.

I don't know who this Vanity Fair article was for but it wasn't for me. Only one author of color is featured, Natasha Trethewey. This photograph simply perpetuates the literary racial divide. It wrong and inexcusable that Pearl Cleage isn't included. Cleage has written over eight novels all set in Atlanta. Her next book Just Wanna Tesitfy comes out this month.

Jones -" I would love to ask Kathryn Stockett, author of the blockbuster THE HELP how she feels about the problematic optics of this photo. Fans of her work say that she is an advocate for the black women who worked as maids in Mississippi. I’ve been told that she is a fierce critic of white privilege. How does she feel to be touted as leader of “Atlanta’s literary sorority” which does not include any black fiction writers. Did she say to the photographer, “Wait! Where’s Pearl Cleage?”

And of course I noticed Tayari Jones was missing. Her third book Silver Sparrow comes out at the end of the month. (Loved it) It's set in Atlanta as are her other two novels. An excerpt

I didn't think I could like the photograph any less but then I read the article Belle, Books, And Candor , which has a members only feeling. If this was in a local Atlanta magazine it wouldn't bother me as much. I know I am a bit biased and bitter but Belle, Books, And Candor reads like it should be in a local free publication. But this kind of members only article should not be allowed in a national magazine.
Posted by Doret at 10:00 AM