Today, a customer called looking for a classical CD called Mi Alma Mexicana / My Mexican Soul by Alondra de la Parra. I was intrigued when I discovered the conductor was female, since there aren' t that many female conductors. De la Parra founded her own Orchestra 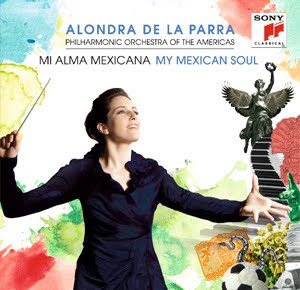 Conductor Alondra de la Parra has gained widespread attention for her spellbinding and vibrant performances making her one of the most compelling conductors of her generation. She has been heralded by Placido Domingo as "an extraordinary conductor" and by press as "uncommonly gifted … her blood and bone and breath are music. She is all music, from top to bottom and from inside out." Ms. de la Parra holds the distinction of being the first woman from Mexico to conduct in New York City, and holds the title of Cultural Ambassador for Mexican Tourism.

Enjoy the music and have a great weekend.
Posted by Doret at 7:57 AM