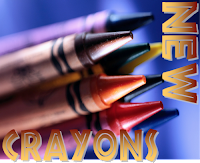 New Crayons is hosted by us! All you have to do in order to participate is get a book by/about a poc (bonus if it's by a female author of color), write a post that tells us you got it and link to it in the comments. Easy peasy.

When the Stars Go Blue by Caridad Ferrer
A dancer driven to succeed.

A musical prodigy attempting to escape his past.

And the moment it all goes wrong.

Dance is Soledad Reyes’s life. About to graduate from Miami’s Biscayne High School for the Performing Arts, she plans on spending her last summer at home teaching in a dance studio, saving money, and eventually auditioning for dance companies. That is, until fate intervenes in the form of fellow student Jonathan Crandall who has what sounds like an outrageous proposition: Forget teaching. Why not spend the summer performing in the intense environment of the competitive drum and bugle corps? The corps is going to be performing Carmen, and the opportunity to portray the character of the sultry gypsy proves too tempting for Soledad to pass up, as well as the opportunity to spend more time with Jonathan, who intrigues her in a way no boy ever has before.

But in an uncanny echo of the story they perform every evening, an unexpected competitor for Soledad's affections appears: Taz, a member of an all-star Spanish soccer team. One explosive encounter later Soledad finds not only her relationship with Jonathan threatened, but her entire future as a professional dancer.

Where the Streets Had A Name by Randa Abdel-Fattah

Thirteen year old Hayaat is on a mission. She believes a handful of soil from her grandmother's ancestral home in Jerusalem will save her beloved Sitti Zeynab's life. The only problem is that Hayaat and her family live behind the impenetrable wall that divides the West Bank, and they're on the wrong side of check points, curfews, and the travel permit system. Plus, Hayaat's best friend Samy always manages to attract trouble. But luck is on the pair's side as they undertake the journey to Jerusalem from the Palestinian Territories when Hayaat and Samy have a curfew-free day to travel.

But while their journey may only be a few kilometers long, it could take a lifetime to complete....

Wanting Mor by Rukshana Khan
Jameela lives with her mother and father in Afghanistan. Despite the fact that there is no school in their poor, war-torn village, and though Jameela lives with a birth defect that has left her with a cleft lip, she feels relatively secure, sustained by her unwavering faith and the strength of her beloved mother, Mor. But when Mor suddenly dies, Jameela’s father impulsively decides to seek a new life in Kabul. Jameela, a devout Muslim, is appalled as her father succumbs to drink and drugs and then suddenly remarries, a situation that turns Jameela into a virtual slave to her demanding stepmother. When the stepmother discovers that Jameela is trying to learn to read, she urges her father to abandon the child in Kabul’s busy marketplace. Throughout it all, it is the memory of Mor that anchors her and in the end gives Jameela the strength to face her father and stepmother when fate brings them into her life again.

The First Part Last by Angela Johnson
This little thing with the perfect face and hands doing nothing but counting on me. And me wanting nothing else but to run crying into my own mom's room and have her do the whole thing.

Bobby is your classic urban teenaged boy -- impulsive, eager, restless. On his sixteenth birthday he gets some news from his girlfriend, Nia, that changes his life forever. She's pregnant. Bobby's going to be a father. Suddenly things like school and house parties and hanging with friends no longer seem important as they're replaced by visits to Nia's obstetrician and a social worker who says that the only way for Nia and Bobby to lead a normal life is to put their baby up for adoption.

With powerful language and keen insight, Johnson looks at the male side of teen pregnancy as she delves into one young man's struggle to figure out what "the right thing" is and then to do it. No matter what the cost.

We hope you all had a relaxing and happy holiday weekend (if you celebrate the holiday that is)!

Ari - I am so exicted that you got Johnson's First Part Last. I loved that book.

And you were so right to gush about When the Stars go Blue.

Maybe some reference to Hues? I will think on it a bit.

@Doret-I am beyond excited to read it. I say that often but this is a book I am genuinely DYING to read. I'm waiting until Friday so I will have uninterrupted time after school.

Yes Yes Hurray! Your approval means the world to me so the fact that you agree that Stars is gush-worthy is awesome :D

Hues, I can work with that!