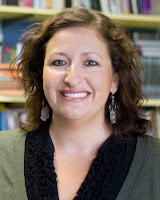 Writing Credits and Awards
I have received the Américas Award for children’s literature and my work has received starred reviews in Kirkus and School Library Journal. My books have also been selected for several best of lists and as Junior Library Guild Selections.
Most recently published work(s), Side by Side: The Story of Dolores Huerta and Cesar/Lado a Lado: La Historia de Dolores Huerta y Cesar Chavez and Chavela and the Magic Bubble

Can you tell us a little something about Side by Side/Lado a Lado?
It’s my pleasure to share the “story behind the story” of this book. Writing this book was inspiring and intimidating because both individuals are my personal heroes. Dolores Huerta and Cesar Chavez did what some of us only dream about doing. They worked to change the world and make it better. They were dedicated to advocacy and human rights for our nation’s farm workers and believed, as I write in my book, “that it was time for the workers to share in the harvest.”

Few people know the important role that Dolores Huerta played as co-founder of the UnitedFarm Workers movement. I wanted to tell her story, and I wanted my daughters to know thatwomen can be incredible leaders in the fight for change.

As I was writing the book, it was an honor to talk with Dolores Huerta and her daughter, Lori de Leon, and I was thrilled that Dolores agreed to share a quote after reading the manuscript which is included in the book. At age 80, Dolores Huerta is still fighting for justice through her foundation. She is an inspiration to all! You can find out more at www.doloreshuerta.org.

Chavela and The Magic Bubble is wonderfully imaginative and colorful. It's also your first non bilingual picture book. Do you plan to write anymore in the future? The majority of my children’s books are bilingual English/Spanish and I hope that is always the case. It is the publishers decision, but if I have a choice, I will always go with bilingual books.

My books have also been translated into Greek and Portuguese. I’m hoping that there will be a Spanish edition of Chavela and the Magic Bubble in the near future!

Side by Side/Lado a Lado is your fifth biography. While reading it I took great pleasure in knowing children would be introduced to Dolores Huerta, a woman who worked just as hard as Cesar Chavez for the rights of immigrant workers. Why do you think it took so long for Dolores Huerta's story to be told for children?

This question would be hard to answer in a paragraph! The important thing to note is that we are in a moment where new voices and stories are being told that represent a multiplicity of identities and the diverse and complicated history of the United States.

Are you working on anything now?
Yes! I’m working on two projects—one is a biography of Pablo Picasso for a Spanish publisherand the other is another fiction picture book, tentatively titled, Maya’s Blanket. I also superexcited about a book I just completed, which is called Marisol McDonald Doesn’t Match, whichwill be out from Children’s Book Press in 2011. Other forthcoming books include, Pablo NerudaThe Poet of the People (Henry Holt 2011) and Waiting for the Biblioburro (Tricycle 2011)
Posted by Doret at 10:00 AM

As a high school student, I'm sad to say that we very briefly (blink and you miss it) read about Dolores Huerta and Cesar Chavez.

I love that your books are bilingual and that they have been translated into Greek and Portugeuse! Way cool :)

I really enjoy seeing how diverse picture books are becoming thanks to the wonderful work of authors like Ms. Brown

Thank you for this informative interview!