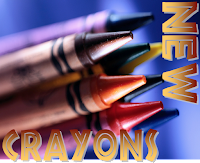 Remember when you were a kid and getting new crayons was a big deal? Getting new books holds the same kind of magic for some of us big kids. Every week on Sunday, I post what's new in our box. Hope you'll share what you picked up from the library, store or in the mail, too.

Very hectic week. Special thanks to all the bloggers who promoted our Color Online Summer Book Drive. Traffic has doubled at the site and books are coming in. Received several books this week including multiple books from Deb at Stoney Moss and Lenore from Presenting Lenore. Won't list of them all. I'll post more next week. New in our box:

After Dark by Haruki Murakami. I confess I have not read the author but I have wanted to. When I saw this at Paperback Swap, I requested it. "At its center are two sisters: Yuri, a fashion model sleeping her way into oblivion; and Mari, a young student soon led from solitary reading at an anonymous Denny's into lives radically alien to her own..."

Bog Child by Shibhan Dowd. One of several titles sent to me by Lenore. I've heard of the book but don't know much. I'm curious after looking it up. "DIGGING FOR PEAT in the mountain with his Uncle Tally, Fergus finds the body of a child, and it looks like she’s been murdered...."

Because I Am Furniture by Thalia Chaltas. Another treat from Lenore. "Chaltas's novel of poems marks an intensely powerful debut. Anke and her older siblings, Darren and Yaicha, may appear typical teenagers in public, but their home life is dominated by their father. Though he is verbally, physically and sexually abusive to her brother and sister, Anke seems beyond his notice...."

What Looks Like Crazy on an ordinary day by Pearl Cleage. A classic Cleage work. I took a course in her work in college.

This is my favorite novel by her and I think she is an impressive playwright. Thanks, Deb. "After a decade of luxe living in Atlanta, Ava Johnson has returned to tiny Idlewild, Michigan — her fabulous career and power plans smashed to bits on one dark truth: Ava has tested positive for HIV."

Miles from Nowhereby Nami Mun. Saw this on a few of the gazillion blogs I read. Very interested. Looking forward to putting it on our shelves. "Teenage Joon is a Korean immigrant living in the Bronx of the 1980s. Her parents have crumbled under the weight of her fatheras infidelity; he has left the family, and mental illness has rendered her mother nearly catatonic. So Joon, at the age of thirteen, decides she would be better off on her own, a choice that commences a harrowing and often tragic journey...."

The Last Song of Dusk by Siddhartha Dhanvant Shanghvi.Someone recommended this to me some time ago. Picked it up at Paperback Swap. "When the astonishingly lovely Anuradha moves to Bombay to marry Vardhmaan, a charming young doctor, their life together has all the makings of a fairy tale. But when their firstborn son dies in a terrible accident, tragedy transforms their marriage into a bleak landscape..."

What did you pick up from the library, get in the mail or at the bookstore this week? .Leave a comment or link to your post.
Posted by Color Online at 12:46 PM

Thanks, Lenore. I was dancing like a child at Christmas!

I have wanted to read Haruki Murukami also. I have his other book "The Wild Sheep" on hold at the library. If I misspelled the author's name, please excuse me.

Hi. I stopped by to check out your blog. I love the comparison of a new box of crayons to getting new books. Yes!!! Both are to die for.

Nice to meet you.

I remember lovin new crayons and you were a big deal if you had the crayon box with the sharpener in the back.

I loved What Looks Like Crazy on an Ordinary Day

One book I read this week and loved was Waler Mosley, new release Long Fall. He's created a great new protag. The book is set in NY 08. Mosley did such a nice job developing Twill, the main characters son, that I could see him having a series of his own. It would be so good. I am just waiting for someone else who reads YA to read this so we can discuss this.

Hi Readingjunky, glad you came by.

Doret, I'll see if I can get my hands on a copy.

A Cuban In London said...

'Remember when you were a kid and getting new crayons was a big deal? Getting new books holds the same kind of magic for some of us big kids.'

Echo that feeling. Glad to know that we share the same passion.

Today, we cataloged and shelved quite a few books, one in particular, Because I'm Furniture was checked out before I got it on our shelf. One of the perks of being an assistant: you get first picks.

I love Murakami!! Went on a binge last year. After Dark and his collections of short stories are probably the only books I haven't read. I'd love to hear what you think. BTW-I like the new layout! Easier to read but still colorful. :-)