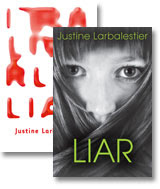 It's taken a marathon or reading and commenting for me to put together what I hope is a coherent and intelligent response to this blowup about Liar.

There is a saying,"When you're white you don't think about it; when you're black, you never forget it."

It is important to acknowledge the very different realities we live. Often we will accuse one another of being overly sensitive or being wrong when the truth is each reality is real.

When most white readers get their fill of righteous outrage, I will still be black. I will still have to hunt for books that promote I really am here and I will likely still be a minority voice in the blogosphere actively promoting books with POC characters by POC writers.

Very few have responded to my comment about the absence of color among book bloggers. Those marketing folks didn't come to that conclusion without some basis in what they see. Something shaped their perception.

Why isn't my brown face regularly featured on book blogs?

And has no one thought about the silence among teen bloggers? The only teen bloggers who have commented are Tashi at Taste Life Twice and Ari at young, black reader, both, teens of color who are active members of Color Online.

And I will not accept that the silence reflects that white teens don't normally comment about industry issues. They comment on YA sites run by adults and those adults haven't spoken up either. Those same adults had plenty to say during the BEA controversy and the riff about professional and hobbyist bloggers.

It is discouraging that we still cannot engage the majority in a substantive discussion about race.

I don't want to blame or guilt-whip white folks. I want acknowledgment and real discourse. I want change. Not tongue wagging.

I was so excited when Ari started her blog. The black teen voice is sorely needed in the mix of book blogging.

As for why brown books aren't better represented on mainstream YA blogs...I think that's par for the course, closely related to the books/authors being put in front of bloggers more often.

Also, in a sense publishing has done brown authors a disservice by allowing the only books that are promoted by us to be of the historical fiction or inspirational street story variety. There's little diversity in the diversity.

Compared to the many flavors of mainstream YA, we're vanilla (pardon the pun).

While mainstream YA has ventured into a million different directions in the last five years, brown books are just now dipping a toe outside the pool we've been allowed to swim in. So, I'm not quite as frustrated with young bloggers.

They're reviewing what's hot (paranormal, vamp, fantasy) or what appeals to them - and that's going to most likely be those books most visible to them. Brown books are barely visible to brown readers much less non POC.

What an amazing occurrence. I really like what you said. I also think the authors comment is good. It is here: http://justinelarbalestier.com/blog/2009/07/23/aint-that-a-shame/

But what you said at the end is most important: "I want change. Not tongue wagging."

This is a tough one to comment on because I see your frustration. It would make me angry too. Let us know - meaning your white reader what it is that we can do?

This whole situation is really awful. I have the ARC of that book from ALA, haven't read it yet, and had no idea the girl on the front differed from the girl inside. I hate that. I don't know why the publishers did it - out of "marketing strategy" or ignorance or what - but it was wrong.

Well-said Susan. I think people are ignoring the discussion because that's what's easiest. But what's easiest usually isn't what's best. Thanks for linking to my post.

I am not angry but I am frustrated with teen bloggers. The reality is they have a voice. Publishers watch what they read and blog about.

I have been equally vocal about what black folks are doing and not doing so let no one say Susan doesn't call everybody on the carpet. I have made a rallying call to black writers and readers to be vocal and visible. We cannot expect others to do more than we do for ourselves.

I didn't wait for the majority to recgonize my existence. I created a space that celebrates POC. I am a voice that will demand you take notice. You might opt to ignore me but not without first knowing I'm here.

I am sick of excuses and talking about the obstacles. We know what they are. What are we doing about it?

Color Online is one, small, but very real response to the need for promoting POC writers and POC characters.

I am mad as hell and I'm going to SHOUT it till I'm hoarse.

What can you do? Buy books by POC writers. Blog about books with POC characters.

All readers can do more to inject color into their reading. And when you make the effort you'll discover POC writes write about everything you want to read.

Tell the publishers to stop pepetuating the idea that we only write historical, inspirational or street lit.

We read and write the same things as all other writers do.

You know this is such a sad thing... for example two of the writers that I am currently reviewing are East Indian(an MD) and a young Psych student who is of Korean decent. Both of their books have white people on their front covers.... Its really weird. How does that make any sense?
Books about and whom represent people of color are not easy to find. It really stinks.
Which is one of the reasons why I subscribed to this site. I do not know of any Sci fi/fantasy writer of color.

Ali of Worducopia and I host a bi-weekly Diversity Roll Call. Our recent assignment was POC in sci-fi/fantasy. I'll be publishing a round-up of that exercise shortly. In the meantime, you can find a good starting list of writers to check out here:

If you're looking for more blogs and sites that feature POC, check our blogroll and watch for guest reviewers. I always link to their blogs.

Let's hope this controversy will motive more bloggers to blog about POC characters and writers.

Can you hear the echo in YA teen blogs? Or the adult run blog sites?

Right. Easy to pounce on Bloomsbury but why is their target audience silent?

I hope this changes some things. But I am a jaded (pro nappy) Black girl and I've seen this all before. But maybe it will be different this time. (I've said that before too)
People who are outraged and shocked this happened need to ask themselves when was the last time they purchased or disscussed a YA book featuring POC, if it's been awhile than you should not speak or comment, unless its to say. I am sorry for not doing my part. I will start reading more YA featuring POC. You have no right to your outrage or oh my, I can't believe what Bloomsbury did, if you haven't help to promote YA featuring poc. Before anyone gets on Bloomsbury they need to think about what they did or didn't do that allowed this to happen.

Tell it, gurl. I've said as much.
How long have you and I both been asking for color time?

Too enough. I am tired of beating on the where are the reviews of color drum every couple of months.

Too enough means I lack the skills to read before I post. Opps

Hi all,
The new Diversity Roll Call is now up and offers the opportunity for bloggers to respond to this issue and the gender issue that's also been hot this week. All are welcome to join, and posts that were posted earlier this week are eligible as well. http://worducopia.blogspot.com/2009/07/diversity-roll-call-on-gender-and.html

Doret, you cracked me up, w/ your typo in the next comment where you corrected the first ("opps"). You must be tired!

I am so tired of the same racist actions by corporate publishers and film studios. AUGH.

As a PoC with a ton of colorist privilege and the ability to pass 90% of the time, I feel like it is my responsibility to talk about these issues as much as possible, because I have the patience and much less persecution weighing me down when I speak, even in anger. It saddens me that I count making one more white person aware of their privilege as "progress." But I have seen some good come out of these discussions (Verb Noire and better inclusion of race issues at sf/f conventions, for one). Too bad it's taking such an unbelievably long time for the hierarchical, colonialist power structures to come crashing down, and I don't just mean in publishing. I want the world to catch up with the twenty-first century.

*sigh* Working on it.

Well, tell it. Thank you very much.

Don't be a stranger. I'd love to hear more of your thoughts- on everything.

I will. Thanks for spreading this Bloomsbury fail and for keeping the issue at the forefront of the publishing industry's mind. I know I sure as hell won't be forgetting any time soon.

I've tried to incorporate more POC writers in my reviews, particularly among poets--since that's one of my main focuses.

I really like what Color Online does for the blogging world and commend you for continuing to bring these issues to the forefront. It takes a lot to change habits of one individual, never mind an entire industry.

The more voices you have, the better things will get.

Bloomsbury has announced it is changing the cover! Publisher's Weekly

This is what I'm talking about. For all those who were skiddish and suggesting we would hurt Justine, think again. You don't know if you'll win if you don't fight.

Happy and teary, here. As I said to Rich, this was the best news I had all day.

I was pretty happy myself. In fact, I wanted to shout it to all the cynics who said our outrage meant little, that we couldn't affect change.

Oh yes we can!

This is such excellent new, and the new cover is so much better - it looks better, it feels better. It's gorgeous - and it fits, there's something wrong if the cover does not match the content, regardless of the blatant disregard of the writer's and the main character's race - which is not excusable. Yeah!